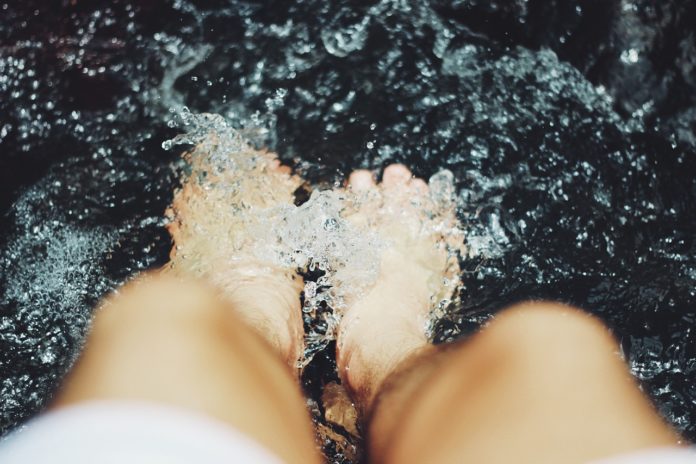 In 1985, I had surgery for a disc prolapse which caused a spiral nerve injury. It caused me to feel numb in my left thigh and down to my 4th toe. It has affected my choice of footwear since I can’t wear heels because I don’t really feel my foot.

The outside of the left foot started hurting about 2 years ago. At first it wasn’t constant but rather sporadic. It feels like I’ve got “soda” on my foot. It’s like pins and needles. It’s recently become a daily nuisance. You can’t imagine how painful it is to constantly have foot pain. I actually have a hard time walking sometimes. I love walking barefoot but it’s impossible because sometimes the best thing to do is having something tight-fitting.

Well, I thought a few months ago. This just isn’t working. I go crazy and just want to cut my foot off (yes, it’s true, because it hurts so much). So I thought I should at least try to handle it with my patches.

I started off with IceWave, but to no avail. Then I tried didn’t do anything either. Glutathione and Energy Enhancer did nothing as well. Then SP6 Complete was all I had left. I placed one patch on my little toe and one patch a bit above my knee. The next day I suddenly noticed something. After sitting there trying to figure out what was going on, I realized that I didn’t have any stinging sensation. I was at peace. I’ve used SP6 for 3 weeks now and change my patches every night. My pain isn’t as bad as it used to be. It still comes and goes a bit, but there are also times when I don’t feel any pain at all in my foot.

It’s so much easier now. I don’t have any constant pains – thanks to LifeWave. Additionally, I’ve learned, or rather re-learned, that we should always remember to keep trying. This is what made me test SP6 and made me start to feel a difference. And what a difference it’s been!

Fact: What is nerve pain?

Nerve pain is caused by disease of, or damage to, the nervous system for example. This could occur in the spinal cord, brain, nerve endings, nerve clusters and nerves. Pain is usually the body’s warning that the tissue is damaged, but when it comes to nerve pain, it is the pain system itself that is damaged. This means that you can experience pain in areas of the body that are actually perfectly fine.

When a nerve is damaged, it can confuse the brain by providing incorrect signals in a particular area, including the nearby nerves. Sometimes the pain disappears, but nerve pain is often times chronic. Nerve pain is often experienced as a burning, tingling/stinging, spinning, tightening, cutting, pricking or stabbing pain, but the pain varies from person to person.

Cystitis begone – read what Bodil did